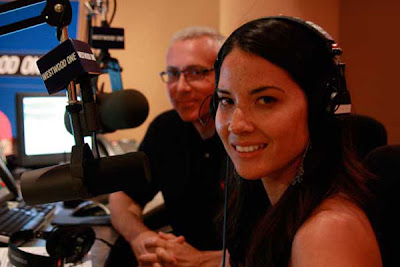 Olivia Munn has been rumored as a permanent co-host for
Drew in the past, but nothing has come of it, unfortunately.
There are few radio shows I manage to listen to regularly, since Rhode Island essentially only has two talk radio stations. One is WPRO (CHECK!!!), and while my friend is going to be hosting an entertainment show starting this weekend, they focus mostly on political talk – Ick. Pass.

The other main talk radio outlet in Rhode Island is WEEI – sports talk. While I can't stand some of the co-hosts on the afternoon drive show, and the morning show is always a horrible train-wreck of butchered politics and sports talk, the early afternoon (Dale and Holly) and late night shows (Planet Mikey, Celtics Rewind with John Ryder CHECK) and game coverage are excellent. However, I can't always stomach the sports talk, especially after a bad game, when horrible callers flood the airwaves. (“Gah-nett is washed up! We should trade Al-hen for David Lee!”)

Because of this, I really wish Loveline was available on my radio, but alas, I always have to catch a stream or a download of it after the fact. Dr. Drew is still taking calls from screwed up kids and stoners, even though Adam Carolla is long gone from the show. Thankfully, Drew also outlasted Ted Stryker, his horrible co-host following the Carolla years that caused the show's ratings to tank.

Currently, Loveline has no co-host with Drew. Normally the guest for the night serves as a sort of color commentator on calls, whereas Drew breaks it down like, shockingly, a doctor would. The variety of subjects he tackles is pretty admirable – It has to be difficult to follow-up a call on pot usage with a girl who has been molested, followed by another stoner asking why his wang can't get hard.

However, the quality of the show is definitely enhanced by a strong guest, as opposed to Drew going solo. The best guests tend to be comedians – Daniel Tosh absolutely kills it every time he guests, as did Don Glover and Daniel Puti (Troy and Abed from Community), and established celebrities like Joel McHale and David Alan Grier. I've frequently linked to DAG in the past, but he just has so many great Loveline bits that I can't resist doing so again. Check out this moment, when DAG talks about his girlfriend cheating on him.