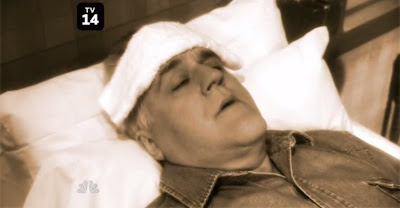 In case the title of this entry doesn't make my feelings toward Jay Leno abundantly clear, this review by the great Troy Patterson of Slate.com does an excellent job. From his first paragraph:

The cold open depicted him [Leno] awaking in a black-and-white farmhouse, a Dorothy Gale coming to, as his bandleader, other subordinates, and also a slumming Betty White crowded round his bedside. The implication was that Leno's months away from Tonight and his prime-time sojourn did not represent a disastrous misadventure but rather a magical mystery tour. The bit was no less shameless than we might expect. And no less unfunny. Pay no attention to the man in front of the curtain.

Patterson is my favorite television reviewer; I consider him the Ebert of the medium. And I agree completely with his take. The return of Leno to The Tonight Show was every bit as mediocre, depressing and lifeless as you would expect, despite some utterly shameless behavior on the part of everyone involved.

Let's start, naturally enough, with the aforementioned cold open. The Wizard of Oz was the easiest movie spoof they could have used for the situation, so of course, they absolutely used it - Jay Leno is effing involved, after all. Except for a brief pop-in by Betty White, the cold open was uninspired and stupid, which segued nicely into a stupid monologue where Leno pretended to be actually upset with NBC.

My whole problem with Leno is that he is seemingly devoid of real emotion. Know what would have been awesome? If Leno started his show and said, "Hey, I'm glad I'm back, and fuck Conan. I got shoved out of this show years ago and pretended to be okay with it, but really, I wasn't okay with that, and I apologize." Instead, Leno was passive aggressive, playing on both the side of NBC management (not acknowledging that his show's MASSIVE FAILURE in prime-time led partially to Conan's low ratings) and against management (calling them idiots now and during the fiasco). Hey Jay, why don't you pick a god damn side instead of trying to sit on the fence for every issue?

After the monologue, we were treated to a taped bit involving Leno searching for a new desk. This was predictably lame, except for a brief segment with my man Adam Carolla. Of course, he was only on for about a minute because he was using some racy humor. sigh. Leno got on a mom for "cooking" her family a nutritious meal of Kentucky Fried Chicken; at least she didn't subject them to his show later in the night. The worst was yet to come though, as Jamie Foxx just acted like a retard for 20 minutes. (Sorry Sarah Palin.) His entire appearance made me throw up in my mouth, and he was followed by Olympic gold medalist Lindsey Vonn, who was dressed up like a street hooker. (Even worse? She looked really uncomfortable in that outfit. It is one thing if she likes to dress that way, but the whole thing reeked more like an idea to capitalize on her image ASAP, methods be damned. She needs a new publicist.)

Anyway, since Jay doesn't have the nerve to relay this message to Conan, let one of his fans instead relay the message to you - Fuck you. You are everything wrong with late night television.