TV Review: The Forgotten should be 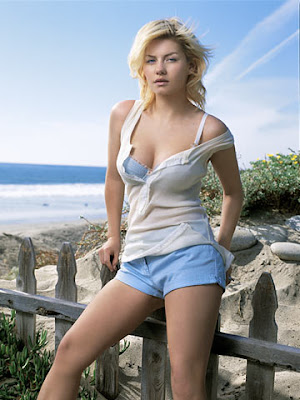 [Right]: Not even Cuthbert can... Um... sorry, I forgot what I was talking about.

There is something authentic but unbelievable about The Forgotten, the Christian Slater vehicle on after LOST. On one hand, it has all of the slick production values and babble that you'd expect from a forensics-style show.

But... When I was watching last night, I just couldn't shake the feeling that it was far, far more sizzle than steak. Frankly, it intentionally shoots for super, duper melodrama. I've watched parts of three or four episodes, since it comes on after LOST, and each time there was always one scene that made me go, "This is too excruciating - I'm changing the channel."

Last night's episode served as the series finale, since the show has been mercifully canceled already. The show apparently got some advance notice of the decision, since the finale did wrap up the series-long angle of Slater's daughter's abduction. Of course, it did so haphazardly, while also tying in some mumbo-jumbo about an Internet scavenger hunt game for money and a serial killer who was probably going to be a recurring character, but isn't now, since the show is canceled.

The show revolved around the idea that Slater led a group of amateur detectives who like to hunt down criminals. Okay, if that's the case, shouldn't things be a bit more lighthearted? Instead, there were plenty of cases about abducted kids and murders and what not. Given the premise of the show and the presence of Slater, I would expect something more in the vein of Psych, and less like Cold Case.

The odd thing is that the supporting characters also seem to be there for mostly comic relief, and thus contrast poorly with Slater's super-serious-guys demeanor. I'm especially referring to Elisha Cuthbert, who is in the last couple episodes of the series. She is so stunningly gorgeous that she steals every scene she is in. Seriously, Elisha, you've got it going on. Good work!

As a result, the show is, well, was, just a big mess. The characters feel like they're fighting for airtime in different shows and Slater is way, way too serious for everyone else. What happened to that baby-faced older brother we all fell in love with in The Wizard? (Note: This was probably just me.)