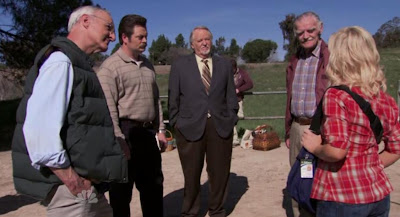 Although Community was still good this week, it was finally surpassed by another Thursday night show - Parks and Recreation.

This week's episode reminded of The Office at its best, since it was a mix of poignant moments - the continued Andy and April drama, Anne's awful photographs with Mark - with the funny, farcical moments between Leslie, Ron and the past parks and recreation directors, which is pictured above. It's nice to see a member of the That Guy Hall of Fame, the guy with the white hair, in the episode. I always forget his name, but he has been in a bunch of stuff, and he's always good. He played a hippie, pot smoking director, the one directly before Ron. 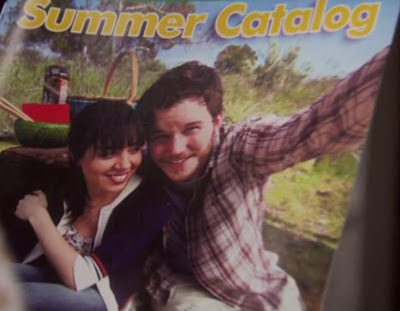 I like how the Andy and April romance is progressing with a very slow burn, and a bit of a pullback this week. The scene outside of the bar was heartbreaking this week, as Andy clearly felt uncomfortable being with someone so young for the first time. Speaking as someone who has dated younger like that, it is a really awkward situation. It was slightly surprising, since April's age in the past hadn't really prevented her from doing anything else with the gang.

I'm not so sure how I like the tease of a Leslie and Ron pairing. I just don't see a woman like Leslie being that interested in Ron. Then again, she is the kind of "Michael Scott crazy character" for the show, so it wouldn't be completely surprising to see her character proceed in that direction. Still though, this was my favorite Parks and Recreation episode of the year so far.