Stephen, Ricky and Karl, best of friends.
Following the suggestions of others, I finally gave The Ricky Gervais Show a chance, and boy, am I glad I did! It airs on HBO, and it is essentially an animated version of his podcast. It features him, his writing buddy Stephen Merchant, and this dumb, boring and hilarious producer named Karl Pilkington.

Karl is stupid. Really, really stupid. Like, disgustingly stupid. On one of the initial three episodes, he talks about how he considers sex something to do when there isn't anything good on the telly. (Note: All three are British, so speaking as a piggish, thuggish American, I enjoy their heavy accents immensely. Also, Gervais has the most wonderful laugh – It sounds like he is in the death throes of a vicious tickle.) 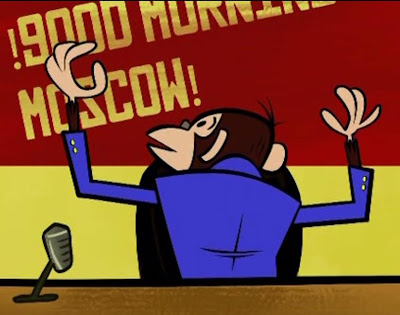 By far, my favorite skit shown on the show so far has been Karl reading an e-mail from a radio listener about the troubles faced by a Russian television station. They kept cutting back staff, until finally, they realized that they had nobody to put on-air. At this point, Karl says they noticed a monkey “kickin' about the studio” and decided to put him on the air. From there, hilarity ensues as Karl tells more details of the story, and Stephen and Ricky viciously tear him apart.

In fact, a regular segment of the show is Monkey News, which just features Karl or Ricky recounting news about monkeys or chimpanzees or anything of that sort. In addition to the news story about the monkey newscaster, Karl also believes that the first monkey in space was trained via a banana dispenser to steer the shuttle “left” to the Moon.

Anyway – I really heart the show. The three episodes I've seen, about 70 minutes in all, have been high quality. I think the show only has a six-episode run for now, and I'm hoping HBO extends it for the future, since I'm sure there is tons of archive podcast footage for them to draw from for the show. Also, a bit from the show gave me a great idea for a hypothetical entry for 7 p.m., and you'll know it when you see it.