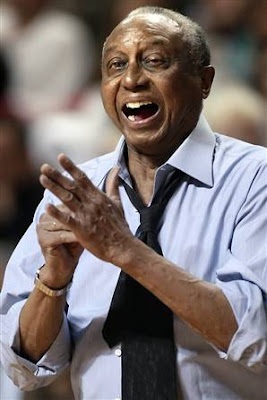 [Right] John Chaney wouldn't have allowed this shit, Temple. What happened to the dominant team I saw beat URI three times, and twice quite convincingly?

Going into the tournament, I basically kept two things in mind when picking teams - The Atlantic 10 was underrated and the Big East was way overrated.

While I still believe the first statement is correct, you wouldn't necessarily know it from the first round 1-2 record of the Atlantic 10. Unfortunately though, Richmond and Temple, both teams that were ranked for portions of the year, drew really bad, non-BCS draws, like Cornell and Saint Mary's. Both are quality teams, and I'm still annoyed that both A-10 teams only managed to get a 5 and 7 seed respectively from the committee, setting them up for those two tough teams.

At least the Big East has been exposed. Every year, I hear some variation of, "The Big East is so tough and they beat up on each other, so that's why they can't play a tough out of conference schedule!" I think the real reason they can't play a tough out of conference schedule is that it would expose their teams. You know, like when Temple throttled Villanova earlier in the year. After first round games, with the miracle win by Nova with the help of the three officials, the Big East is 4-4, with the four wins coming from its No. 1 to No. 3 seeds - Syracuse, Villanova, Pittsburgh and West Virginia. Big East teams have also done shabby in the Not Invited Tournament, I've heard, but I refuse to follow that.

Anyway, as far as my own bracket goes, I'm 23-9 after the first round, with four loses coming from the failures of Temple, Richmond and Georgetown. While I think the Big East is overrated, I thought Georgetown had a great draw, being in Providence - an arena they play in frequently - and as a No. 3 seed, with a beatable Ohio State team lurking. Whoops!

The Chaney photo is from this old MSNBC story about Temple suspending him the rest of the season for sending one of his players on to the court to "send a message" to a player with some hard fouls. Ah, Chaney!
Posted by Steve G. at 3/20/2010 02:00:00 PM