TV Review: All of my Thursday night shows, from first to worst! 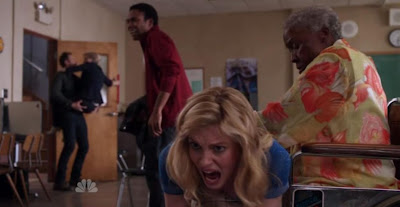 The singular funniest moment of the episode is captured above, although I found Brita's story angle the best of the three. Normally, she is the weakest part of the episode, but her talents were used pretty well in this episode.

Also, maybe this is just me reading into things again, but she seemed to be a little flirty with Troy. This actually works for me, much more than her and Jeff works. Likewise, he and Annie shared another moment, albeit after he had sex with Pierce's ex-stepdaughter. Maybe it only took 17 episodes for the writers and producers of Community to realize the most natural pairings on the show. In general, the show is really starting to gel for me, and I think this episode was the highlight of the season so far. 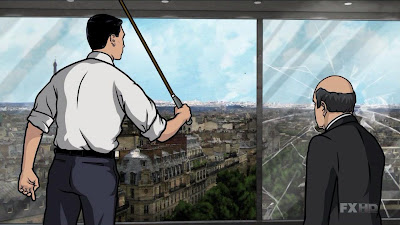 In a close second would be Archer, which continues to delight me as a filthy, animated show that follows in the footsteps of It's Always Sunny In Philadelphia and The League. While I realize its animated format means not everyone will be into it, the voice work of H. Jon Benjamin, Lucille Bluth and Chris Parnell is splendid.

Thursday night's episode focused on Archer and Lana being wooed by the rival of the Isis spy agency, Odin. While they intentionally express interest in Archer, they are actually more into Lana, and eventually try to off him.

In a weird way, the show feels like a merging of Arrested Development, Always Sunny and The Venture Bros. Besides Lucille, Judy Greer (Kitty the crazy secretary) does a voice, and Jeffrey Tambor guest starred this week week as the voice of the head of Odin. When you add these distinctive tones into the already great work of Benjamin and Parnell, then you just make a good thing better. 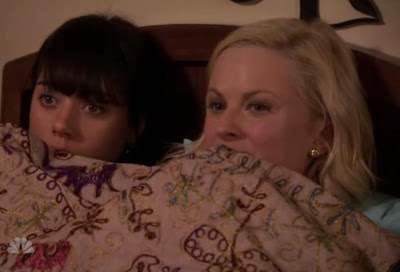 In third place for the night was Parks and Recreation, which had a solid if unspectacular episode. Leslie gets asked by the mayor's office to hunt down a rouge possum, which is exactly as “hilarious” as it sounds.

By this, I mean that things continue to be a little too “on the nose” for the show. A possum being loose in the house is more like an idea I would have for My Best Friend Landlord, not an actual network television show developed after 1990, excluding Disney or Nickelodeon or ABC Family shows.

The secondary story arcs were actually much better than anything Leslie was doing this episode. April was house-sitting for Anne, who she doesn't like, because she used to date Andy the Shoeshiner. While this didn't provide many chuckles, it did expand the character of April past her “oh whatever” roots a bit more.

I really wish they had made the focus of the episode the dynamics between Ron Swanson and Mark though. Ron's garage was badly, badly out of code, which made for hilarious sight gags as Mark was going to write him up for 20-plus violations. Their dry wits are normally the best part of any episode, so the two of them combining for a story arc was a dynamite as it sounds. I kept hoping they would devote some more time to it throughout the episode, but they only got two or three scenes together. Still, Parks and Recreation is at least progressing forward and remaining funny, unlike the last place Thursday night show. 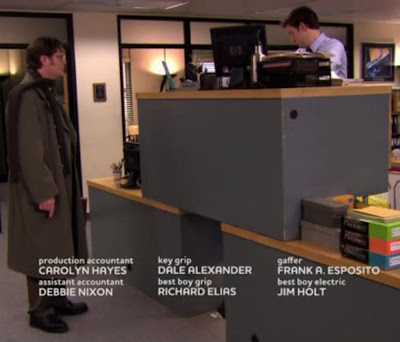 And in last place for the night, third of the three shows I watched, was The Office. With Pam finally having her baby in last week's episode, I thought we could focus solely on the funny this week. Unfortunately though, most of the episode featured whiny, sensitive, unfunny Michael, as he got into a fight with the Paula Dean clone that now owns Dundler-Mifflin.

The funniest part of the episode for me involved two site gags, one of which is illustrated by the picture of the right. When Jim was gone and staying home with Pam and the baby, Dwight took over his desk, and combined the two units with his two units to create MegaDesk. He keeps trying to recreate it through the first portions of the episode, before the middle drama with Paula Dean Clonus makes the funny die. The throwaway sight gag at the end of the episode, with Jim creating a three-desk, two-level creation called Quaddesk, was also funny.

However, The Office seems stuck in a rut right now. While I've mostly ignored the talk on the Interwebz about how it has fallen off, this is the first episode that really made me go, “Meh!” The birth episode was better than this one, and normally, the “special” episodes of The Office kind of suck. Heck, they didn't even reference the Dwight and Angela agreement of the birth episode. I'm hoping they go somewhere with the remaining six or so episodes of the season, because right now, it seems stuck in neutral.