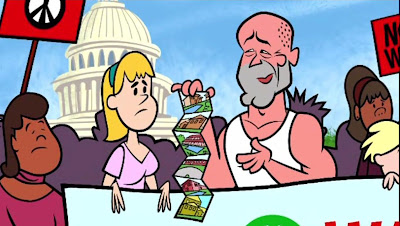 If Karl Pilkington from The Ricky Gervais Show could be anyone from the annals of history, living or dead, who would he be? Why, Bruce Willis, of course.

I mean, you had doubts? This is, after all, a guy who thought the phrase "people who live in glass houses shouldn't throw stones" referred to the period in time when people moved out of caves and into glass houses, literally. His stupidity really has no bounds, which means it is endlessly ridiculed by Stephen and Ricky for our benefit.

Outside of wanting to be Bruce Willis, Karl also revealed that one time, to see what it would be like to live without a body part, he tried to wash the dishes without using his thumbs. Of course, while he was doing this, he spotted a neighbor across the way in the buff. So to make things even, he revealed his butt to her, as his girlfriend in the other room asked him what he was doing.

... It's kind of hard to describe why this is all so great. Sorry. However, if you have any appreciation at all for British humor, then you need to be watching this.