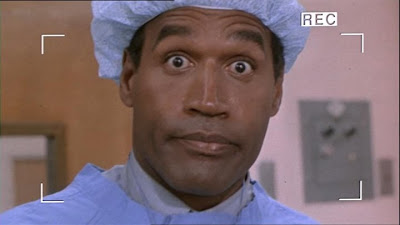 Remember when OJ was funny and not like, a murderer?
Since the Oscars are tonight, there is no better movie to review for the occasion than... Naked Gun 33 and 1/3? Well, yeah! As my blogger buddy Mel notes at Mel Got Served, it does take place at the Oscars, and there are some great scenes throughout the film.

Relevant to this discussion though, the last 20 minutes of so feature Detective Frank Drebin (Leslie Neilsen) at the Oscars, as someone mistakes him for Phil Donahue. It's not as slapstick as some other parts of the movie, especially once Frank ad-libbing during the award he's presenting. "We should skin those cats, and use their fur for warmth..." There is also a nice spoof of The Untouchables that serves as the movie's opening scene.

While Naked Gun 33 and 1/3 isn't as good as the first two movies of the series, or the television show the movies are based on, I realize that is setting a pretty high bar on the franchise. The Oscar scenes are probably the peak of the movie, but they can't compare to the Enrico Palazzo scenes of the original Naked Gun, or when Frank serves as a baseball umpire: