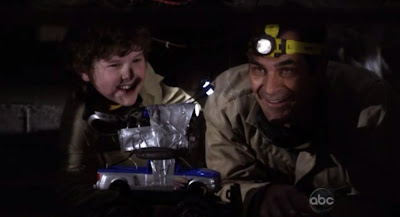 While I'm as amazed as everyone else that Two and a Half Men apparently now sets the standard for television sitcom ratings, at least Modern Family gives me hope on a weekly basis that people are developing better taste. The three families involved in the show each have their dramatic and farcical highs and lows that make for a delightful stew of Good each week.

The main overlapping theme between the three families on Wednesday night's episode was trust, although the dramatic "high" involved the gay couple going through a crisis while raising their adopted baby. Already a bit high-strung because of their status as a gay couple, they had the additional problem of their baby seemingly bonding with their Asian pediatrician and calling her mommy. Melodramatic, over-the-top hilarity ensued.

However, like every episode of the show, there was a tint of humor to even these somewhat-somber proceedings. Thankfully, Modern Family never switches into full-out Grace Under Fire mode; there is always a laugh buried into the dialogue. Also thankfully, nobody has gotten cancer or abused by their parent yet. (Note – I was not much of a fan of Grace Under Fire, obviously, yet still somehow know enough to know those were both plot points. I'm a little ashamed with myself right now.)

Modern Family packs a lot into its 22 minutes, as there were actually three other storylines in this week's episode. As a contrast to the gay couple, the lightest plot involved the "normal" family looking for treasure underneath the house, and being scared of the dark space there. (See the image I used at the top.) 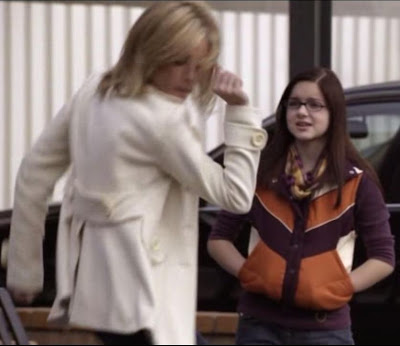 The normal family tends to be my favorite in each episode, and the singular best moment of the episode was when the mom attempted to teach the middle daughter how to dance [right]. This wasn't that successful, and the daughter's awkward cringe as a girl her age walked by her reeked of authenticity. As she watched in horror as her mother danced, the daughter said, "Now I understand why you're with dad."

Also crammed into the episode were subplots involving the oldest daughter of the normal family trying to get her driver's license – on her third try – and the old-young family trying to overcome their collective fear of roller coasters. All-in-all, it was a great restart for Modern Family, which had been off since Valentine's Day. If you still haven't gotten into the show, then this is an easy-enough introduction to the series for you.