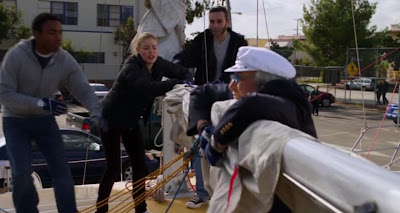 The last one was well-received, at least by Carly Googles, so why not do it again? A belated look at my Thursday night viewing, ranking them from first to last. (And sorry Carly, I'm still not watching 30 Rock. Was it even on this week?)

- Community is again the top of the pyramid, or maybe more appropriately for Thursday's episode, at the head of the mast. The gang is trying to decide which blow off class to take, and they split between Jeff's pottery class suggestion and Pierce's idea of a sailing class. Ultimately, Pierce's group - with Shirley as the captain, and Troy and Brita and Starburns as supporting crewmates - has the funnier moments.

Helping them out significantly is the fact that the community college is apparently not within two hours of water. The sailing class exists solely because they were given a boat following a drug raid. Therefore, it is just out in the parking lot, and their salty instructor barks out at them how the "sea" - also known as the asphalt - is tossing their boat around. Even better, the instructor is played by Lee Majors, another in a string of surprisingly good guest appearances.

I agree with this review here about the best line of the episode, which is uttered by Majors - “From the moment you climbed abroad, I saw sea men inside of you.”

This whole angle with the sailing class overshadows the other plot of the night – Jeff taking beginner pottery and getting upset with a dreamy doctor who is taking it just for fun. They have a bit of a tortured competition, in that Jeff is tortured by losing the competition that the doctor doesn't even realize he is in. The whole thing falls flat though, excluding the cameo by Tony “Buster Bluth” Hale as the pottery instructor. Annie and Abed are also just secondary characters throughout the episode, which limits two of the best in the ensemble cast.

Speaking of the ensemble cast, there is a very minor subplot with Senor Chang throughout. Someone keeps stealing his clothes when he exercises at the YMCA, meaning we are subjected to him without a shirt. Funny, but not hilarious. Also, there wasn't a payoff with it on Thursday night's episode, which makes me wonder if it will be continued to be milked for a few more shows. 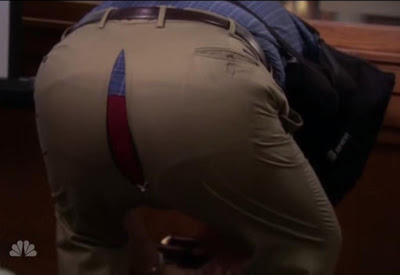 Parks and Recreation jumps up to the second slot on my list, and it almost wrestled the top slot away from Community. However, I just couldn't put it ahead because the April, Andy and Ann triangle crap bogged down another really good episode.

The highlight of the episode, besides Jerry splitting his pants and farting (see picture), was definitely Andy Samburg. He did a cameo as a super loud park ranger, which was totally awesome. It reminded me of a voice my friend Andy and I would do when we were mocking how stereotypically nerdish we were being about something – typically Heroes or journalism or ladies. 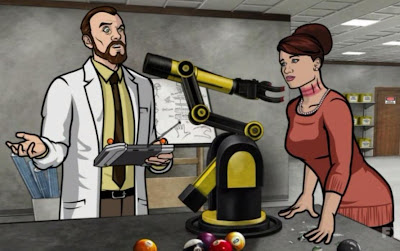 Archer was a bit disappointing this week. This was yet another episode detailing the various mommy issues that Sterling Archer has. While Jessica Walter (Lucille Bluth!) is always funny as Malory Archer, I feel like the drama between her and her screw-up son has been a little drawn out and prolonged at this point.

Instead, I wish they would focus some episodes on the secondary characters, such as the weird scientist Krueger, choking fetish secretary Cheryl / her name that episode, or Pam, the Human Resources director who can't keep her mouth shut. Parnell is great in every episode as Cyril Figgis, the prudish boyfriend (kinda) of Aisha Tyler's spy character Lana Kane, the closest thing the show has to a “straight” role.

Even a bad episode of Archer still beats the pants off of the last show on my list, though. 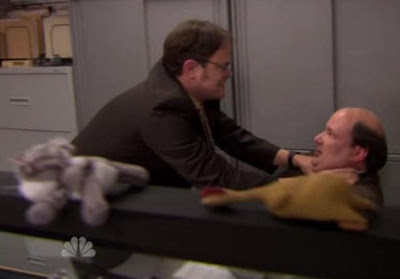 And finally, The Office just continues to disappoint. Seriously, how did it all go downhill this fast? Is Jeff Zucker writing for the show, or just Jay Leno?

The episode focused on the sales staff trying to earn back their sales leads after Michael confiscates them. Apparently, the sales staff was acting like bigshots because of the emphasis that Saber places on them. The whole angle felt out of place, since I don't want to see people within the office acting mean to one another, excluding Dwight.