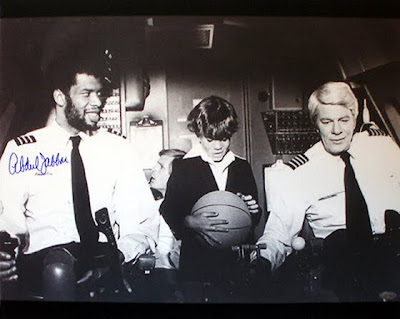 Joey, have you ever been in a... in a Turkish prison?
I was saddened to learn this week that classic Hollywood actor Peter Graves died this week at age 83. For more information on his life and movie roles, I think this obit story by Time magazine hits the notes pretty well. He was prolific as all heck, as his IMDB page lists 131 roles.

However, I will always remember Graves for a movie that oddly shaped my youth, considering it was released in 1980 - Airplane! I've exposed on my love for the sequel in the past on this blog, and the performance of Graves in both of the movies is understated and great. I first saw the movies when I was in my teens, along with other fare like Naked Gun, and I think they all shaped what I find funny and how I personally write. The Phantom Tollbooth and The Hitchhiker's Guide to the Galaxy were the literary versions of the Airplane, with characters playing everything completely serious and literal for laughs. All of this media just has a sort of light playfulness with language and words that makes them all wonderful.

Unfortunately, I find that this is a quality severely lacking in most current spoof movies. I have no idea who buys movie tickets for all of the Wayans' brothers crapfests now, since the last funny Scary Movie was the second installment, and this was primarily due to the presences of David Cross and Chris Elliott. I admit that I will sometimes be tempted by the trailer for one of their movies, only to find horrible reviews on the Internet, or worse, no reviews, which means that the studio barred critics from attending the turd bomb.

This wasn't always the case. Using my standard critic bar, Roger Ebert loved the original Airplane, and all of the Naked Gun movies.

What's the difference? While Airplane used its cast to play against type - such as the aforementioned Graves as not a stoic hero, but a pilot vaguely interested in pedophilia - the new spoof movies use their cast to film B-movie versions of existing movies. There is always an undercurrent of "aren't we so funny for making fun of this?" during the later Scary Movie movies, and it is even worse in tripe like Date Movie and Epic Movie. The characters of Airplane were never, ever in on the joke, which probably helps to explain why everything is actually funny.