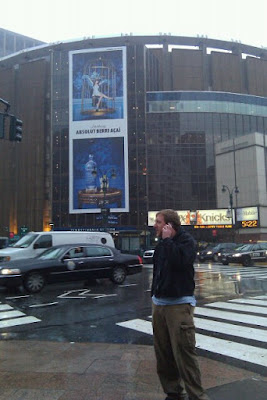 Because I'm completely nuts, and because my friend Chris is nuts, we decided to make the trip to New York City yesterday to watch the Rams play. Now, if you're in New England, or watch the national news at all, you may have heard that Rhode Island was dealing with the worst flooding of the past 100 years.

This was absolutely true, which made leaving... interesting. I left my house at 12:45, figuring it would be the usual 15 minute trip to Route 95. Unfortunately though, the most direct outlet - Kings Factory Road to Route 91 - was blocked, as was the other outlets, Burdickville Road and Buckeye Brook Road. As a result, I had to make a big loop to catch Route 95 in Connecticut, where Chris met up with me at about 2. Meaning, 75 minutes for a trip that usually takes 15. Along the way, I almost stalled out in a couple huge puddles, and my engine is now probably wet, because my car continues to stall from time to time. ick.

Once we got on 95 though, it was smooth sailing. Chris drove, and we made incredibly time even though we stopped once - We were on the outskirts of Manhattan by 4:15, and parked around 5. We were at a garage only a block away from Madison Square Garden, which was wicked sweet.

Before the game started, we went to a place near the Garden called Brother Jimmy's for a drink. While there were a couple Rhody fans there, it wasn't anything special, and the drinks were $6 a draft. So, instead of eating there, we ventured off to White Castle! It was my first time, and the onion-grilled burgers really hit the spot. I was less impressed with the chicken rings though; I was expecting something a bit more onion-y with those too. Before the game, we also went to a pizza place at Penn Station, and I had a slice of delicious tomato and cheese pizza, and we each some Coors Light tall boys. (We're classy like that.)

Finally, the games! The opener was Dayton vs. Ole Miss, which was pretty boring, actually. Dayton led comfortably pretty much the entire game. We sat in our assigned 300-level seating to start, but then moved to 115 a little before halftime. At the half, I went outside to meet my friend Allie and to give her her ticket. Then we watched Dayton maintain their lead against Ole Miss for the win.

For the start of the Rhody game, we moved up again, because Chris is the master at this. He found a spot on the baseline, two rows up, in the folding chairs! I think I was on television during a couple inbound plays. While Rhode Island lost in overtime, primarily because they couldn't hit their free throws, it definitely looked like Ulmer got tripped from our angle. The crowd went pretty ballistic at the final horn, as the boos and swearing at the refs far outweighed the cheering for UNC.

My overall impression of Madison Square Garden was kind of... meh. It just feels like a really big version of the Providence Civic Center, or any other generic, multi-purpose arena. I think they try to spice things up with the display boards and scoreboards, but it definitely feels like a 1960s or 1970s-era Grey Blob stadium.

Anyway. The Rams' loss put a damper on my mood, so I didn't really want to stick around in New York to eat. We ate on the road instead, and again, we made great time. Considering that we left New York around 1, I thought it was great that I made it back to my car by 3:30ish. Of course, it then took me 45 minutes from there to get home because of all the road closings, but hey, at least I didn't have to rent a hotel!
Posted by Steve G. at 3/31/2010 10:30:00 PM