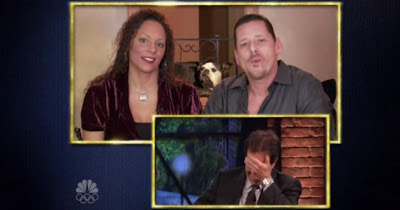 Danielle and her greasy husband argue their cases,
while The Fonz looks on in the background.
I have no idea how much Jerry Seinfeld has to do with The Marriage Ref, but the show would really benefit if it had a stronger editor. The show is constantly being billed as by him, and his idea, kind of, but it desperately needs to edit itself in several areas.

The premise is explained in an incredibly cheesy animated monologue, which is narrated by Seinfeld. He and his wife were having an argument, and he thought, "Hey, if only there was someone who could settle this for us after we each presented our case! And hey, what's the deal with airplane peanuts? And why did I date a 17-year-old when I was in my 30s?"

The animation is symbolic of a common problem with the show. Between that, exaggerated camera shots of people and celebrities laughing, and clearly canned studio audience applause, there is a ton of fluff that could be cut out completely. Host Tom Papa didn't really show me much in the initial episode either, mostly serving as a sort of Tom Bergeron who doesn't detract, as opposed to adding to the episode.

These aspects detract from the best two parts of the show - the couples themselves and the celebrities analyzing them. The first episode featured Danielle, who was not pleased that her husband wanted to keep a stuffed version of his dead dog, The Fonz, in their home. The second couple argued over the installation of a stripper pole in the house. Yes, it seemed a bit like an episode of Maury at times, but in a far classier, less trashier way.

The first episode featured a panel of Seinfeld, Alec Baldwin and Kelly Ripa. While Seinfeld was kind of meh, Baldwin and Ripa were both great, especially Ripa. She has so much sass and spunk, and it comes through tremendously in a show like this. Hopefully, she is on future episodes. Baldwin played his usual, 30 Rock-ish character, which was effective as a counterpoint to Ripa. Natalie Morales was also decent in the "fact checker" role, which will apparently rotate among NBC News / Infotainment staff.

I saw enough good in The Marriage Ref to give it a chance for a couple more episodes. However, without some better editing, I could definitely see it getting stale after a little while. 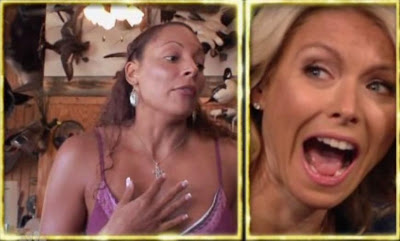