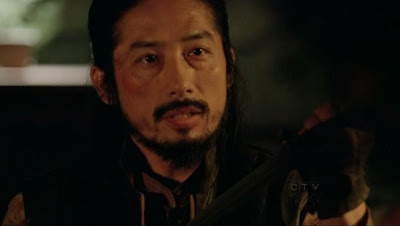 Before I start, the usual LOST caveats apply for this post - Big time final season and Tuesday night spoilers are in the following post. Read at your own risk!

Coming a week after the incredible "Lighthouse" episode, Tuesday night's "Sundown" couldn't quite meet those lofty heights, although it was still good in the sense that it advanced the story. The crew from the other side of the Island - Sun, Ilana, the pilot - finally got to the Temple with the rest of the players, and I assume the next episode will be a Sun or Jin one, with an outside chance of Ben, since they haven't had "featured" roles yet in an episode. (For what it's worth, Wikipedia says it'll be Ben.)

The main focus of the episode was Sayid. In Bizarro LAX, we find that Sayid's former love, Nadia, is now married to his brother. Sayid doesn't think that he deserves her, because of all the horrible things in his past. Of course, Sayid's brother turns out to be sleazy as well, agreeing to some ridiculous loan, and he gets mugged. The loan shark (who turns out to be the mercenary from the boat that almost killed all of them) threatens Sayid's niece and nephew, and takes him to some weird kitchen for (presumably) torture. Sayid overpowers him and his two goons, killing all three, and then sees Jin tied up as well before the episode ends.

On the Island, Sayid and Kung Fu Master have one of the best hand-to-hand fights of the show's history; very cool stuff. This is followed by Sayid meeting with Fake Locke on behalf of the Temple. He tries to kill Fake Locke as Kung Fu suggests, by stabbing him with some ornamental sword, but it has no effect. Fake Locke then has Sayid deliver a message - He's coming, and Jacob is dead, so they have no protection. He will be coming at sundown, and he does, killing everyone. But before he does, Sayid shows that he is still capable of killing, as he drowns Kung Fu in the Temple's pool and slashes Hippie Richard's throat.

Overall, I didn't think this episode had as many standout portions as last week's. Dramatically, the best scene was the ending, with an eerie track playing as Fake Locke surveyed all of his "troops." However, it did serve a purpose of advancing the story and bringing some more characters into play, as opposed to adding exponentially to the mystery.