What Steve Thinks About: 42 Midgets vs. A Lion

Unfortunately, this would not be "groovy" for Mini-Me.
Sooooooo. On The Ricky Gervais Show, they read a news story about 42 midgets in Cambodia fighting a lion. Apparently, the athletic commissioner of a traveling circus of midget wrestlers was challenged about their actual fighting skill by a heckler, and the heckler said that 42 midgets couldn't take down a lion. According to the news story, the fight was stopped after the lion killed about 28 midgets, and the remaining 14 were too maimed to continue.

I was curious enough after hearing the story to Google it, and unfortunately, the whole story is an urban legend. (I say “unfortunately” and that probably makes me a horrible person.) However, just hearing about this hypothetical fight immediately makes my mind imagine what would happen if it actually, uh, happened.

First, a few qualifiers. According to the fake news story, the midgets were not armed, and did not have access to weapons. It was just them in a Colosseum-style ring vs. the lion. Also, no mention was made of any special armor. So, I'm assuming that puncture-proof Kevlar vests are unavailable.

With those provisions in place, the lion has to be a heavy, heavy favorite. Its sheer size and speed would make it a lethal killing machine in the ring. It would be very hard for the midgets to encircle it, or to generate enough force with just their fists or legs to significantly damage the lion. Because it would be in a ring, there would be no terrain to use as cover, or to launch a more effective attack. Also, lions are much faster than humans, and presumably have greater endurance, so you couldn't wait for the beast to get tired, especially since it probably wouldn't take much energy for it to mow through the midgets.

If the midgets want to take down the beast, I can only think of a couple ways, and they're all pretty grisly, and require sacrificial lambs. Or, in this case, sacrificial midgets. 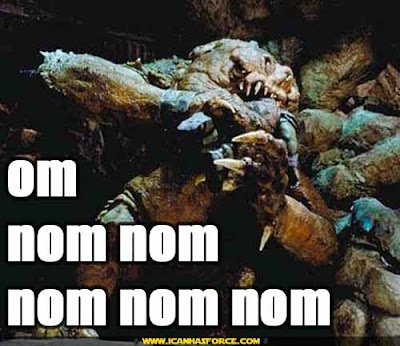 1) When the lion is chomping on a midget, shove it even further into its mouth, in an attempt to choke the beast to death. This would be kind of similar to the scene in Return of the Jedi, when the huge beast in the pit at Jabba the Hut's lair momentarily choked on the bone in its mouth.

2) Scavenge a midget corpse for weaponry. While the midgets can't bring any weapons into the ring with them, this does not prevent them from doing the sick deed of using a dead midget for their femur and other bones to craft crude weaponry. Yeah, it is extreme and gross, but do they want to kill the lion or not?

Anyway... Sometimes I worry myself.

The photos of the lion and Mini-Me are from their respective Wikipedia pages. The rancor from Return of the Jedi comes from this page.
Posted by Steve G. at 3/08/2010 07:00:00 PM