What if Bill Cosby never hit it big?

I guess the real reason that my wife and I had children is the same reason that Napoleon had for invading Russia: it seemed like a good idea at the time.

While I think Dave Chappelle is the best active comedian out there, since I love every stand-up performance of his I can get my hands on, a review of a legend begs the question - What if Bill Cosby had never stopped doing stand-up?

When I was a kid, I used to ride around with my grandfather, a big tall guy with a shock of white hair. (He still looks that way to this day, even though he has to be in his 70s or 80s by now. And yeah, I don't know his exact age; ages and birthdays are a huge, huge blind spot in my knowledge.) He had a cassette player, and while I had no idea what kind of music he listened to, he had two tapes I loved to listen to, both by Cosby - Himself and For Adults Only.

Although For Adults Only sounded like the worse album, Himself is actually worse. The opening skit is all about drugs, like pot and cocaine. Lest you think my grandfather was corrupting me, he had the clean versions of both tapes. I was shocked years later when I listen to the performances and found this out, but Clean Cosby and Dirty Cosby are pretty similar, since the material (drugs, sex) changes more than his language, which is almost always clean.

Minus the filth, Cosby mostly joked about common experiences anyone could relate to. From Himself, there were legendary sequences on having chocolate cake for breakfast, visiting the dentist and catching his kids - girls - trying to pee standing up like daddy. The signature moment of For Adults Only concerns Cosby's concerns of why a single egg costs $0.89 from a hotel room service. (But hey, at least it is served "any style", right?) 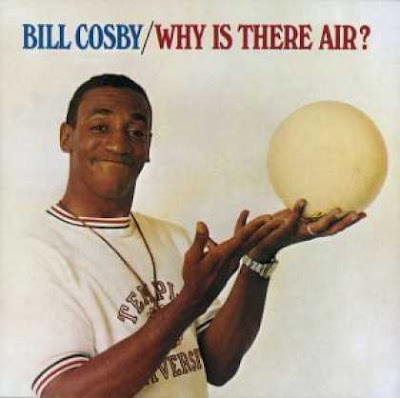 After my adolescence, I lost touch with Cosby for a while, until my buddy Eric noted he was back into him. This reinvigorated my own interest, and I stumbled upon the 1965 classic Why Is There Air?, which remains my favorite CD of his to this day. The title track is splendid, as are his stories about his $75 car, his psychologist shop teacher guilting confessions out of classmates, and best of all, playing for Temple football against Hofstra.

However, because of the success of The Cosby Show, Cosby kind of stopped producing as much stand-up, which is a shame. In the 1960s, he produced 10 records. In the 1970s, he was down to eight, some of which was Fat Albert stuff. He only managed two in the 1980s, one of which was Himself thankfully, and just one in the 1990s.

If you remove the television option from Cosby's career, then I think he develops similar to a guy with much, much different material - George Carlin. Carlin was known almost exclusively for his stand-up, excluding short stints as a Saturday Night Live host, Rufus in Bill and Ted's Excellent Adventure, and Mr. Conductor on Shining Time Station. (This of course setup my favorite late Carlin joke: "You know what I say? Fuck the children! They're getting entirely too much attention. And I know what some of you are thinking: 'Jesus, he's not going to attack children, is he?' Yes he is! He's going to attack children. And remember, this is Mr. Conductor talking; I know what I'm talking about.")
Posted by Steve G. at 3/29/2010 07:00:00 PM